In 1888, Vincent van Gogh traded the electric nightlife of Paris for the tranquility of the French countryside. There, in Arles, the Dutch artist flourished creatively, even as his mental health declined. He created 200 paintings and over 100 drawings inspired by the idyllic landscape, local people and charming towns. Among the many iconic works that emerged this year in Arles was the masterpiece, Cafe terrace at night.

Completed in September 1888, this blue and yellow canvas depicts a snapshot of a street in Arles, located near the Forum Square and the palace street. At an unknown late hour, people are crammed onto the outside terrace of a local cafe as people pass by in the street. Nestled between the two rows of buildings is a glimpse of a vibrant starry sky, reminiscent of other Van Gogh paintings, Starry night over the Rhône and The starry Night. Like the rest of the Post-Impressionist’s work, the Cafe terrace at night was underestimated during Van Gogh’s lifetime. Today, however, it is recognized as one of the artist’s most important works.

Scroll down to discover 10 interesting facts about Cafe terrace at night. 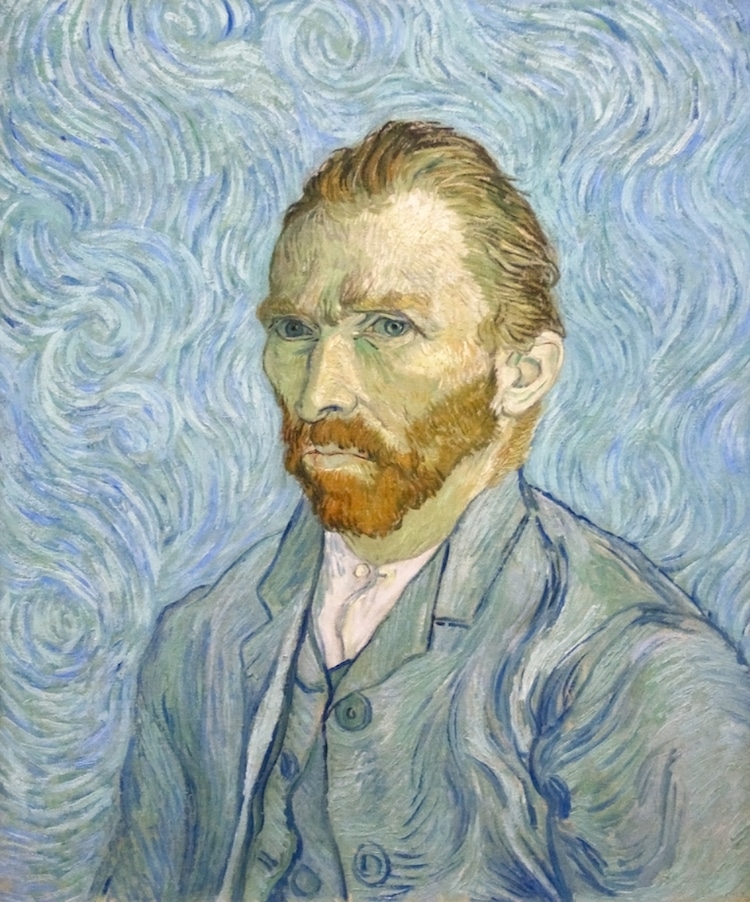 It is based on a real place.

Unlike his friend and artistic rival Gauguin, Van Gogh preferred to paint from real life and Cafe terrace at night was no exception. He set up his easel at the corner of the Forum Square and captured the sight of a bustling local cafe lit by artificial light. While he retained most of the main features of the area, he omitted some of the architecture and embellished the ambience with his own stylistic choices.

“I really enjoy painting on location at night. In the past, they drew and painted the picture from the drawing during the day. But I think it suits me to paint the thing right away,” he wrote in a letter to his sister. 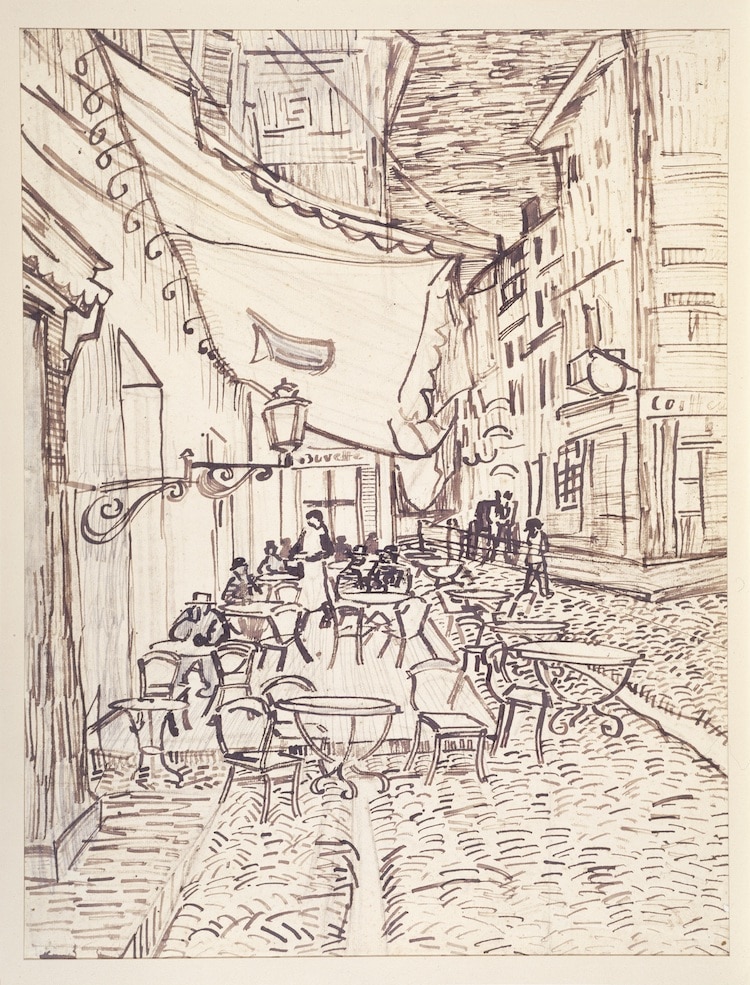 He first made a drawing of the painting.

Van Gogh was no stranger to hard work and often created many preparatory drawings – practicing composition and figures – before picking up his brush. He also made a sketch of the Cafe terrace at night in ink, rendering the narrow view of the street almost the same as it is depicted in color. The only significant difference between the two pieces seems to be the sky, which in the sketch is filled with dozens of hatch marks instead of stars. 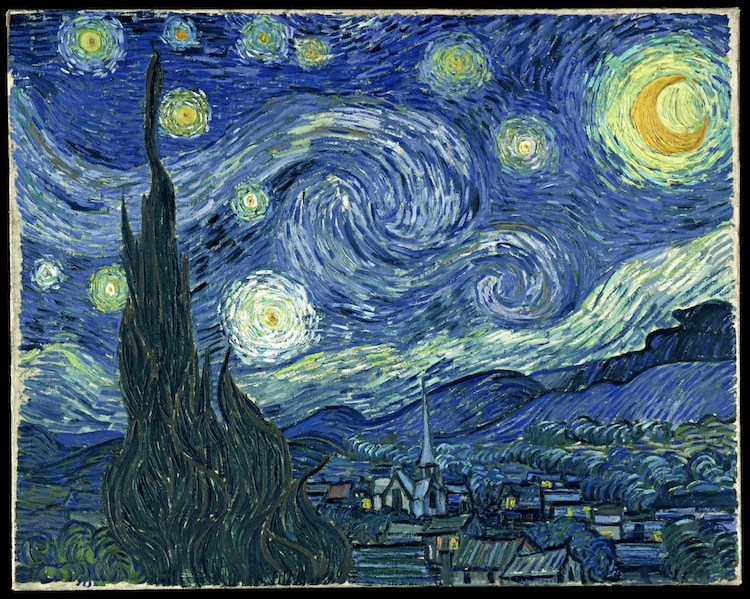 The starry Night is undoubtedly one of Van Gogh’s most iconic works of art. However, the splendid canvas was not the first interpretation of expressive skies – he first used the star motif in Cafe terrace at night. In the small gap between the architecture, viewers can see a luscious blue sky dotted with shimmering yellow dots. 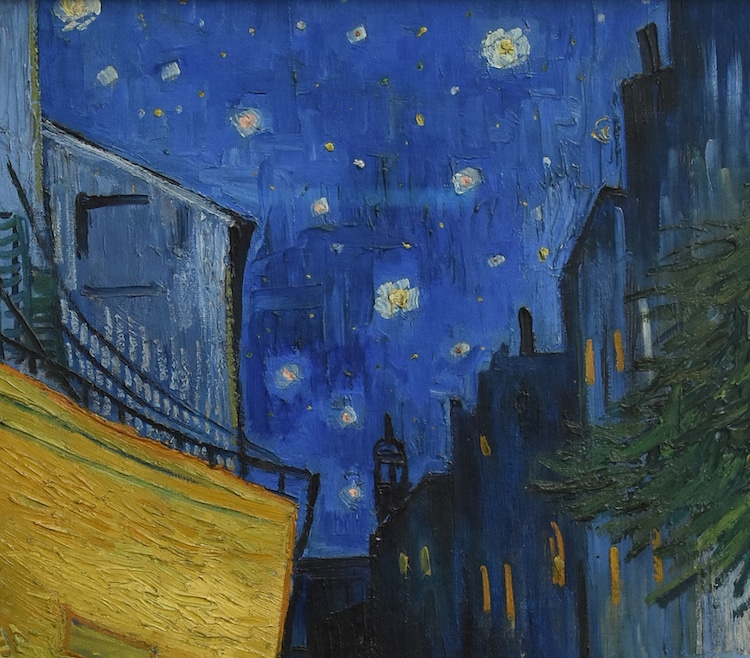 The stars in the table are in the right place.

According to Van Gogh’s catalog of letters, Cafe terrace at night was known to have been completed in September 1888. However, scholars have reduced the dates he worked on the piece to the 17th and 18th of the month. With this information, they were able to compare the arrangement of the stars in Van Gogh’s painting to what they would have actually looked like at that time. In the end, they realized that the artist had placed the stars exactly where they would have been on those dates.

He did not use the color black anywhere in the painting.

Although a work with “the night” in the title evokes the idea of ​​a darkly rendered scene, Van Gogh managed to create the painting without using the color black. Instead, it relies on a range of different blues and yellows to convey the scene.

“It is a painting of night without black, with nothing but beautiful blue and purple and green and in this environment the illuminated area takes on a color of pale sulfur yellow and lime green,” he said. he explained in a letter. 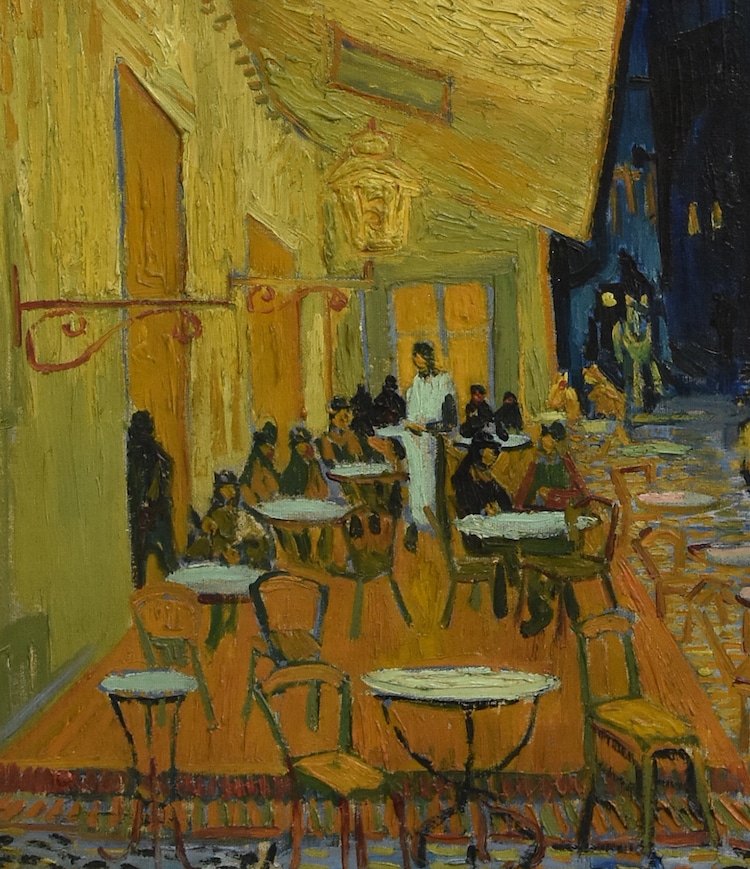 Some believe the painting is associated with the Last Supper.

In 2013 scholars proposed that Van Gogh’s painting may include references to the Last Supper. Among the most notable evidence is the inclusion of 12 figures on the café terrace – the same number of people described in the Bible – and the “holy” yellow light surrounding them (similar to a halo).

Coffee terrace at night could represent a scene from a novel.

In a letter to his sister Wilhelmina, Van Gogh says:

“You never told me if you had read Guy de Maupassant Nice friend, and what you now think of his talent in general. I say this because the beginning of Nice friend it is precisely the description of a starry night in Paris, with the lighted cafes of the boulevard, and it is somewhat the same subject that I have just painted.

Because of this description, art historians believe Cafe terrace at night depicts a scene from Maupassant’s novel, which describes a group of people drinking at night, illuminated by the lights of a building. 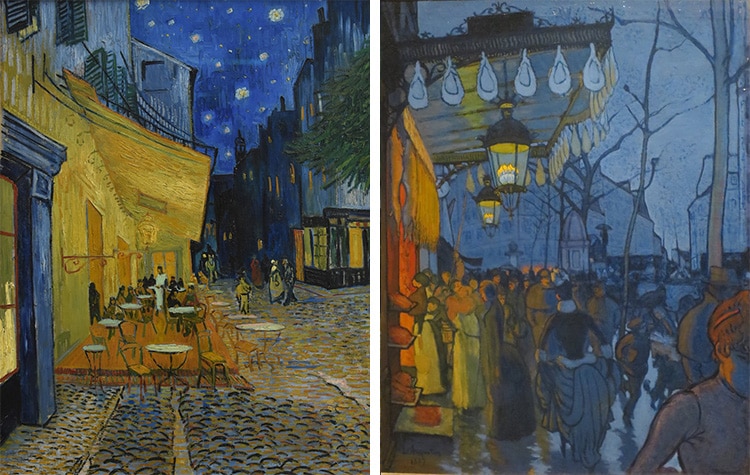 It could also have been inspired by a friend’s painting.

However, the novel Nice friend may not have been Van Gogh’s only influence. Although he mentions a starry night in his letter to Wilhelmina, there was no such descriptor in Maupassant’s novel.

Instead, historians believe the composition of the painting – with the narrow perspective and rich blue color palette – may have been based on the work of fellow Post-Impressionist Louis Anquetin. Famous for his cloisonnist style, Anquetin created Avenue de Clichy: 5 PM a year before Van Gogh’s work, and there is a striking resemblance between the two plays.

He has been known by three different titles.

Before it became known as Cafe terrace at nightthe painting was exhibited under the title Coffee, evening in 1891, and alternatively known as The Café Terrace on the Place du Forum. 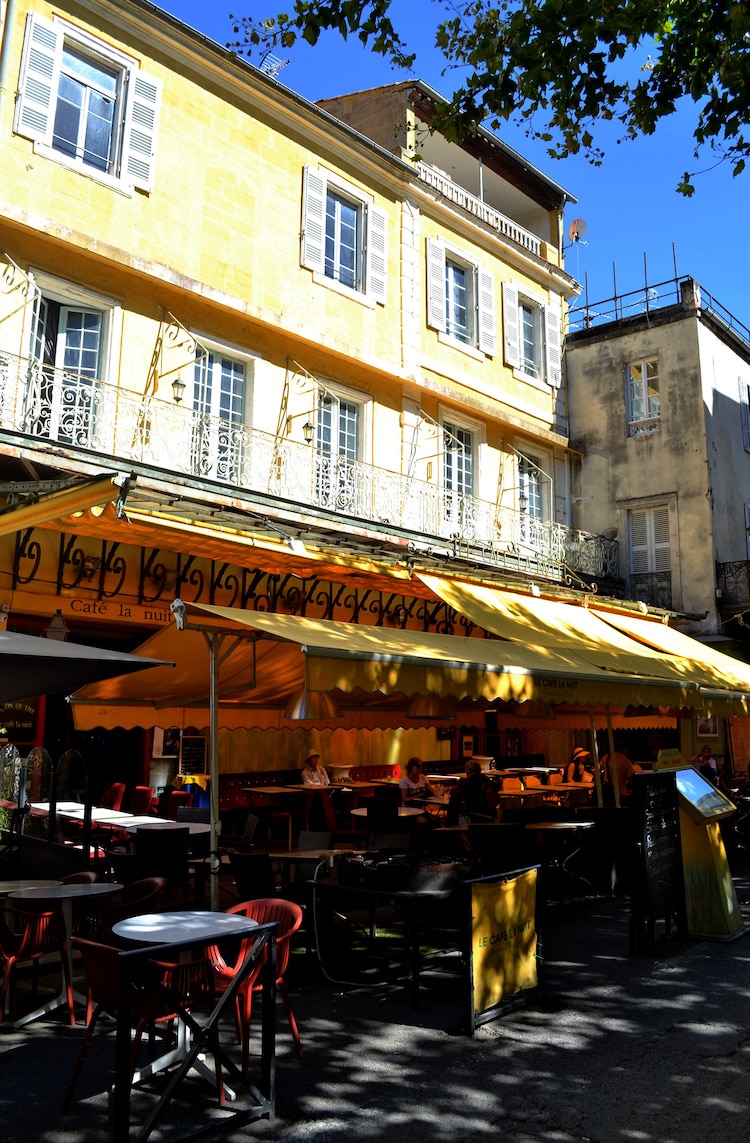 The cafe depicted in the painting still exists.

While many sites of famous paintings can no longer be found, Van Gogh’s Painting Cafe not only still exists, but is still in operation. Renamed Café Van Gogh in honor of the artist, this destination restaurant was restored in the 1990s to resemble its appearance in the famous painting.

20 Inspirational Van Gogh Quotes To Motivate You To Create